My daughter Julie was 30 years old and had been going with Ryan off and on since high school. Julie is a very sensitive and caring child, the third of my four children. Julie met Ryan at the Waterford School in Sandy, and she attended college in New York City at the prestigious Parson’s School of Art and Design, earning a degree in fashion photography. Julie’s success, however, was in selling health insurance, not photography. Julie was good at selling insurance and quickly moved into a management position where she taught and managed a staff of sales people, including her younger brother Michael whom she lured to New York from Salt Lake after he graduated from the University of Utah in business.

The Affordable Care Act and other regulations affecting health insurance had a severely negative impact on her health insurance business, but her residual income was enough that she could get by without working. She moved back home to Salt Lake where her romance with Ryan was reignited, and now they were planning their wedding.
Nancy, my ex-wife and Julie’s mother, wanted Julie to have the best wedding possible. Nancy considered several venues for a reception and chose the new Waldorf Astoria Hotel at The Canyons Resort near Park City. Nancy also hired a professional wedding planner to handle the color scheme, invitations, and all the details that went with an impressive, opulent wedding.

Although Julie had lived in New York City for over ten years, she still had a lot of friends in Utah that would be included in the list for invitations, and of course, all those whom Nancy wanted to impress. Who was NOT invited was significant–Nancy’s two sisters, their families, and me or anyone from my side of the family. No one who knew me or my sisters or their families was invited for fear that I would find about the wedding and show up uninvited.

The wedding plans were going well until Julie received my text message saying I knew she was getting married and when and where she was getting married. I wanted to attend my daughter’s wedding. I wanted to walk her down the aisle and give her away as all fathers want, but I did not want to just show up uninvited. Nancy had prevented me from attending my oldest daughter Amy’s wedding and I did not want her to keep me from Julie’s wedding, as well. Julie replied to the text message with, “I cannot have you there. It would cause big feelings for certain people. Today is my wedding day, and I want all the attention focused on me.” I interpreted this reply to mean that Julie did not want Nancy to “freak out” when I showed up at her wedding.

I knew Ryan’s father, so I called him and asked him what he thought about my attending Julie and Ryan’s wedding. Ryan’s father was firm in saying that it would be a really bad idea. It was then obvious to me that the issue had been discussed extensively for Ryan’s father to have strong feelings about it.

Also obvious was the fact that Julie told her mother about the text message. For Nancy, the situation became critical. How were they going to stop me from attending Julie’s wedding? Everything was in place. It was too late to change the time or location. Someone had to talk to me, but who? Nancy could not speak to me. Julie was too emotional about the issue. It was hard enough for her just to answer my text message. I don’t believe Julie wanted to exclude me. She was afraid of what Nancy would do if she told me I could come.

Amy came from Chicago to help with the wedding plans. She and Nancy formulated a plan to respond to my text message in a way that would further hurt and humiliate me. I was active in the LDS Church and Amy suggested that she speak to my Bishop and convince him to talk to me.

Amy called Bishop Whipperman and tried to convince him how it would ruin Julie’s wedding if I were to attend. Amy could not explain to the Bishop all the problems between Nancy and me because she did not know them. All she knew was the fabricated cover story Nancy used to convince Amy she should never speak to me again. I had not spoken to Amy since her mother divorced me 12 years ago, and therefore, I could not refute what she had been told. Amy also told the bishop that they could not count on my respecting this warning, so they were going to hire armed guards to keep me out of the wedding. Getting my bishop involved and discrediting me was the humiliation part and having my daughter Amy involved was the hurtful part.

It was just a few days before the wedding when Bishop Whipperman called to arrange a meeting with my wife and me at our home. Bishop Whipperman had known me for about 11 years and he knew my character. He also had been Nancy’s bishop and knew her character, so the humiliation part backfired on Nancy. It must have been uncomfortable for him to be put in the middle of a situation that did not concern him. He told us a little of Nancy’s cover story about me that he had heard from Amy and warned us of the extent of Nancy’s determination to keep me from causing a scene at my daughter’s wedding by showing up. Nancy created a false image of me as a person so terrible that it would be in the best interest of everyone concerned if I did not attend my daughter’s wedding. I am not that kind of person, but it was not about anything I did.

Nancy’s need to keep me from my children was a result of an intricate web of lies she had told about me in order to take total control of our computer consulting company and to alienate my children from me.

I started a computer consulting company in 1985 that grew and became so successful that by 1990, when Nancy was fired from her job as an administrator of a law firm for having an affair with the managing senior partner, Nancy saw it as a better source of her income that any other options she had. Nancy had worked most of her life, not so much that she needed the income, but she felt strongly that she needed to be in control of her own destiny. She never trusted anyone, especially men, and she needed to insure her independence from me by having her own income. Our relationship had always been a competition rather than a partnership. Nancy could not relate well with anyone unless she had complete control, and so she could not work with me in the company without taking control.

I thought I could use her help in the company, but she immediately began making plans to take control of the company. At first I thought I could deal with her aggressiveness, but as she began to replace good people in the company who were loyal to me with less qualified people who were loyal to her, I became increasingly frustrated and angry, which led to the demise of my marriage. Nancy used our divorce to finally get total control of the company. Nancy really did not want to divorce me, but she saw it as a legal tool in taking total control of the company.
After the divorce, Nancy called me daily in an effort to maintain control over me. She was sure I would remain under her control since she now had control of the income, and then we could get remarried on her terms. I spoiled her plans when seven months after she divorced me, I met Janeen. Nancy was devastated that I was interested in someone else. She may have lost her ex-husband and would be permanently a divorcee, which did not fit into her plans. Nancy began stalking Janeen. She even called Janeen’s son’s employer in an effort to get him fired.
When I married Janeen, Nancy threatened me saying, “Don’t ever contact your children again. You have a new family now, and I’ll make sure you know nothing about your children—not births, baptisms, marriages, etc. You will know nothing about your family.” She had lost control of me, and so she had to do everything in her power to guarantee that I remained estranged from my children. She utilizes every diabolical method possible to perpetuate the estrangement so my children will never know the truth. Some of the most repugnant examples are: She insisted she took control of the company because I was lazy and incompetent, not because she wanted the entire company for herself. She forced a termination of communication with her sisters, my sisters, and anyone else who may be able to tell my children the truth. She had to, or the truth may come out.

This sounds preposterous, but Nancy’s relation with her sisters, Judy and Sherry, is a window into Nancy’s mind and substantiates this theory. As the company continued to grow, Nancy hired her sisters, Judy and Sherry, to help her manage the company. They had both worked for the company for many years and they knew how Nancy had taken control of the company from me. Not long after the divorce, Sherry had a daughter Jodi who was the same age as Julie, and they had been very close their entire life. Jodi was getting married, but Nancy would not let Julie attend Jodi’s wedding. Nancy told Julie that Sherry was suing Nancy, so Julie could have no contact with Jodi or anyone else in Sherry’s family. A simple check of public records confirmed that there was no such suit.

I do not believe that my children do not want a relationship with me, but that they choose rather to keep the peace with their mother. They know her well enough to know that she will stop at nothing to enforce her obsession with control. She lost control of me when I married Janeen, and she is still doing everything she can to punish me. This is partly because of her anger, and partly as an example of what will happen to her children if they cross her.

My daughter Julie is getting married this afternoon at the Waldorf Astoria in Park City. I asked her via text message if she would have a problem with me attending. She said I could not attend because of “big emotions” of some of the people there. (My ex wife, Nancy, I am sure)

They are so freaked out at the idea of my being there that they asked my bishop to tell me not to attend. They even mentioned hiring special security guards to keep me out. Can you believe it?

The only possible reason I can think of for this infantile behavior is that Nancy is terrified that I may tell my kids the other side of the story behind our divorce which they have never heard. 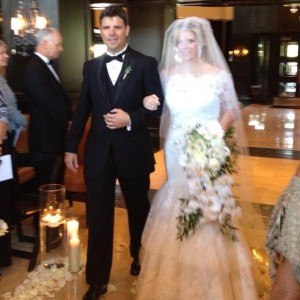 Here is a photo of my son Jason walking my daughter Julie down the aisle.  I should be there instead of Jason.  I wonder how she felt.  What is more important than having her father next to her at this time? What would make a young lady reject her father so?  Ask the one who hired the security guards.

There will be much more to come on this sub ject, but in the mean time I am going to share the short texts I submitted in my Creative Nonfiction class at the U.

Watch for “The Other Side of the Story.”

I welcome your comments.