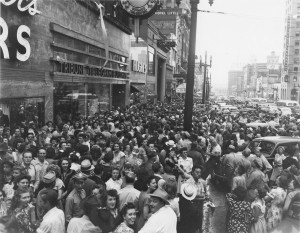 A large number of people gathered together on Salt Lake City’s Main Street the day Japan surrendered, bringing an end to World War II. Everyone had been impacted severely by the war. Most people in the picture had lost loved ones and/or friends in the war, and many of the men had served in the war and experienced the horrors of war first hand. People in the United States were justifiably in fear of being conquered by the Axis powers of Japan or Germany and they themselves, or people they loved, would then be subjected to the war’s atrocities. Fear had come to an end that day and hope was on the horizon.

The photograph shows a large number of people standing as close together as people on a rush hour subway train, and the people covered the entire street including the sidewalks. The cars parked on the street are hardly visible behind the hoards of happy people.

What I knew as the Tribune Building on the east side of Main Street between First and Second South is named the “Tribune Telegram Building,” indicating that telephone technology had not penetrated every household and telegrams were a common way of communicating.   I can see the Studio movie theater just down the street showing “The Picture of Dorian Gray” which was produced by in 1945 by Albert Lewin.

The streetlights are not what they are today. They are taller and much more decorative in the photo rather than merely sterile functional sources or light as they are today. It is clear that curved glass was not available in automobiles since there was a vertical bar separating the two flat sides of the front windshield. Curved glass in automobiles did not happen until the 1953 models.

The appearance of the people is just like what is seen in old movies. Many of the men are wearing hats, and the women have long curly hair with overly painted bright red lips that were common in old 1940s movies.

The woman in the center at the bottom of the photo is very prominently displaying teeth that indicate orthodontia has come a long way since then. The man next to her is a little heavy, but everyone else seems to be thin. The general population today would have more heavy people.

Women are all wearing dresses, whereas today, young women would be wearing shorts and tee shirts or halter-tops. After all, this was a hot August day. If my mother had been in the crowd, she would have been wearing maternity clothes since she was 8 ½ months pregnant with me. We can’t see the women’s legs, but if we could, I am sure we would not see any nylon stockings with seams up the back. Nylon replaced silk for women’s stockings in 1940 because it was more durable and could stretch.  Nylon was used heavily in war products like parachutes and ropes and  was not available for stockings after the U.S. entered the war.   You may see women who had painted lines up the backs of her legs to appear to be wearing nylon stockings. If a woman could find a pair of nylons on the black market, they would cost about $20 a pair. After the war, Dupont shifted the use of  nylon from parachutes and other war products to stockings.

Men do not look too much different today except for shorter hair and the hats. Some of the men are wearing uniforms indicating they are home on leave or stationed at Fort Douglas.

This day marked the end of World War II and the dawn of a new era of hope for our country.